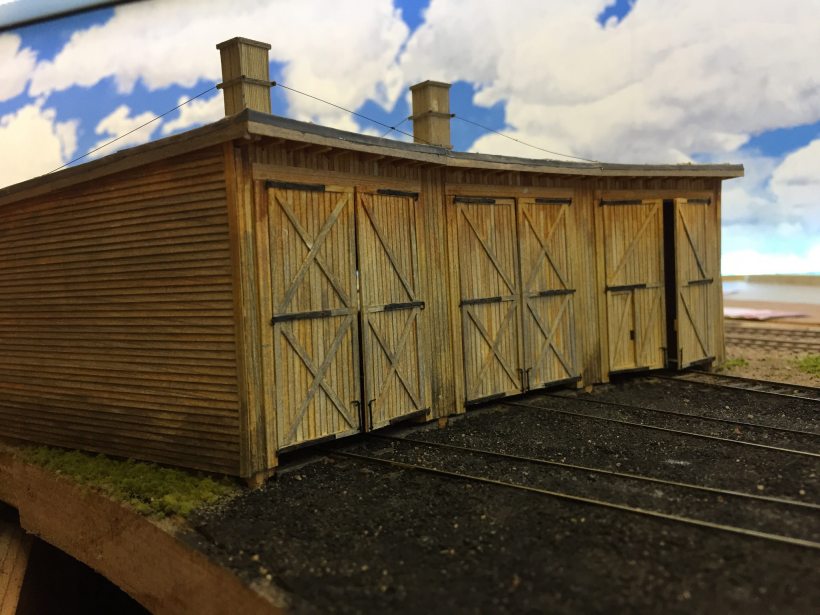 Well, this site went quiet for a while, didn’t it?  I moved most of my modelling thoughts over to Pembroke87.wordpress.com, for reasons that I don’t quite recall.  Probably it was because managing the Drupal site was more work than I wanted to continue to do.  It wasn’t that it was particularly hard; it’s just that managing a website is not how I want to spend my hobby time.  Wordpress, especially where someone else worries about the running and securing of the site, is a much better solution for me.

So, I’ve now moved most of the old content to this new WordPress site.  I think I will continue to blog about the layout over on Pembroke87, but cover Proto:87-specific content here.  Expect a lower update frequency, but hopefully not as slow as it’s been for the past four years!

I’m happy to make your acquaintance if you’re modelling in Proto:87.  So, please do drop me a line!

I could hold them off no longer. It was time for the posse to descend on my own basement, which has been in renovation for over a year. When I invited them, I had grand hopes of being in a place where they could actually help me with benchwork construction, but as the date loomed, it became clearer and clearer that this would not be the case.

So, they arrived to find the basement clean, but the walls still unfinished, and the floor still bare plywood. There was no electrictricity, save for the old lights and an extension chord from far away.

However, I had cut out the shape for the top of the baseboard that will go in the corner. This will provide a home for the engine facilities and Pembroke Manufacturing. I was most curious to see if the engine house will fit on the baseboard, and so, we set out with a large compass and pencils, some paper and various boxes and blocks of wood and mocked it up.

The result can be seen in the photo. The container to the left will be the engine house. The coffee cup and jar of screws on the right will be the water tower, which will mark the end of the scenicked portion of the layout. Staging is out of bounds on the window sill to the right. In behind, the pieces of wood represent Pembroke Manufacturing, which I have moved from its original location north of the engine facilities because, well, I don’t have room to represent the whole line!

Pembroke Manufacturing will be the only trailing-point spur as a train is inbound to Pembroke, and thus makes an important operational element. In fact, the more I run through operations in my head, the more excited I become to get to operations. I had originally thought it would be a one-horse layout, but further study of the timetable shows that, with the operation of a special, I may be able to keep two trains busy. The sequence would go something like this:

Will it keep two operators sufficiently engaged for an evening’s fun? I don’t know, but I’m excited to find out. Of course, we’re years away from having enough stock! Two more engines need to be built, as well as the layout, and the first engine took me four years. However, we model railroaders are great at imagining things that have yet to be built.

Meanwhile, the drywall goes up next Tuesday and the room needs to be ready to serve as a guest room for our Christmas guest. It’s been a full-court press for months, and there is no sign of abating. There is a long list of tasks to complete before the drywallers arrive, and I guess I’d better get to it! 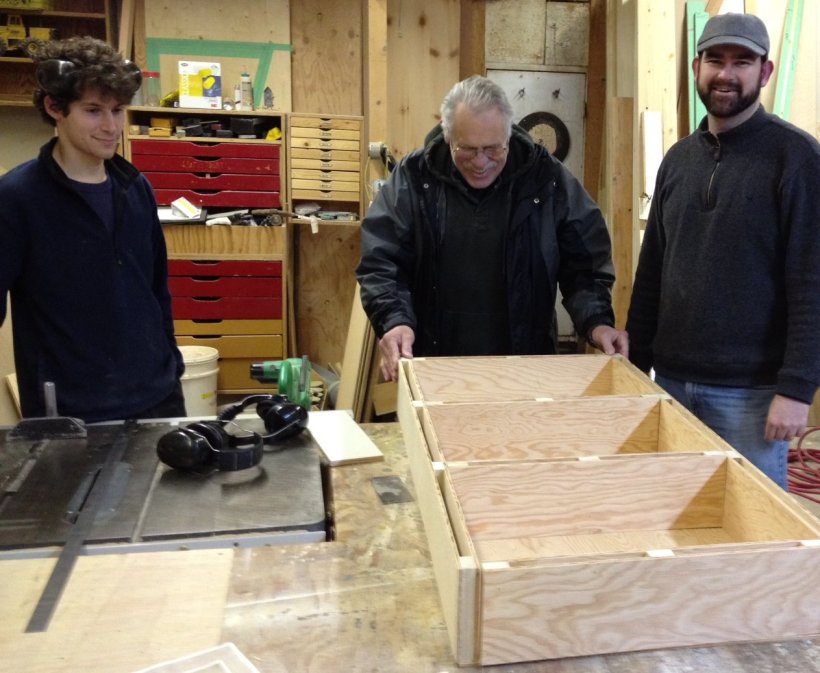 It’s been a few months since I posted on the progress of the Proto:87 Posse. Since that time, we have visited Jim Peters and Julian Watson and mostly talked about their plans. This month we were out to Andrew Hutchinson’s place, where we spent a little time reviewing his ideas for a small display layout. Then it was out to the shop to work on Julian’s modules.

Julian is building a P:87w63 (That’s Proto:87 5’3″ gauge) layout of Victorian Railways. He started with six modules that he built in Perth and had shipped over here, but has decided to redo the bases as he was not happy with their precision. For the mulligan, he is going with the new-fangled construction popularized in MRJ.

By golly this is a lot of work! It had better be worth it! At the end of the evening, with four of us working on gluing and nailing, we had enough bits to put together three modules, but we pulled the plug before doing more than a test-fit.

It’s been two months since we were at Chris’s house. In October we traveled out to Langley to visit Jim and see his space. It was largely a talking session, and I think he’s been convinced to bend Prince Rupert around the room to allow a little running room. He’s in the middle of renovating the main floor of his house right now, and just sawed off the ends of his fingers, and so, it will be interesting to see his progress the next time we’re out there.

This month we went to Julian’s place and mostly thumbed through his collection of books on Victorian railways and checked out his baseboards. We made a giant stack of baseboards so we could work on height visualization.

Next month we’re out to Andrew’s where he’s coming up with a plan for a small portable display. Then in February, we’re at my place again. Hopefully by then the basement’s ready to receive a layout, as I have every intention of putting these eight hands to work and getting a start on building when they’re here.

I’d better get to work! Where did I put that Tuck Tape?

This week, the Proto:87 Posse (we had to come up with a catchy name) showed up at Chris’ house. Chris has benchwork in place for half his layout and wanted some help on figuring out what to do with it. He’s new to Proto:87, but I have a feeling, judging by some of the track he’s handlaid before, that he’s going to be a big producer once he gets going.

He’s been collecting passenger equipment and has a ton of really nice cars. Sadly, like all of us, he is a wee bit tight for space, and so, we’re not going to see the Super Continental winding its way through the Rockies on his layout. We did come up with what we believe is a workable concept for terminal switching his passenger trains, though. There is also space for a tiny bit of freight switching, but the focus is going to be passenger.

We left him with a table top covered in trains and boxes, all aligned along hastily drafted full-size track center lines. By the time we were done, we were all excited about the concept, and we really hope that the radii actually work out.

His homework for next time is to get some P87 wheels under some of his passenger cars, the Rapido ones especially, and play with them on the different radii of tracks. We’re quite concerned that the working diaphragms are going to be a problem on 42″ curves.

On Saturday, September 3, we had the first ever meeting of Proto:87 modelers in Vancouver. Julian Watson, who moved from Australia a week ago Thursday, suggested we get together, and Jim and I put out a notice to our respective networks. In the end, there were five of us to share burgers and beers on my deck.

We had a good time jawing about wheels and track and ultimately decided we would form a round robin group to help with each other’s layouts. We’ll be meeting the first Wednesday of the month, starting at Chris’ in October. Watch this space!

The Sacramento NMRA convention is all over, and I’m returning back to Vancouver to get properly started on the layout room renovation. I presented a well-received Proto:87 clinic on the Monday. I started with an overview of the history of Proto:87 back to the early days of the Model Railway Study Group in the late ’60s, and brought everyone up to date with the currently available products. I guess there were about 25 people in attendance.

One surprise for me was the amount of the confusion between Proto:87 and Code 88. Code 88 refers to a popular, though non-conforming, wheel dimension used by some HO modelers. The “88” is the width of the wheel in thousandths of an inch. While code 88 wheels do not conform with the HO standards, and thus will not work on all HO track, many modelers have success with them on a subset of available track. Because they spend all their time looking at rolling stock, and the track is an afterthought, these modelers are content to run with a wheel that is merely 37% oversize (rather than 71% as the standard code 110 wheels are). They ignore the flangeways and other compromises in the track. Proto:87, of course, specifies both track and wheels that are accurately scaled from the prototype.

There was much Proto:48 action in the contest room, but I didn’t notice any Proto:87 other than my own.

I’ve been researching for my upcoming clinic on the State of Proto:87, which I’ll be giving in Sacramento next week, and found a couple of Aussie sites that indicated that this site hasn’t been changing much. What the? If there’s one thing I try to do, it’s post here occasionally. It usually doesn’t appear on the home page because I never particularly considered the home page mine. So, yes the homepage didn’t change for years, but the blog has been updated at least every few months.

Speaking of blogs, if you’re actively building a layout right now in Proto:87, and are looking for a place to put a blog, I’d be happy to host it here. Now, I’ve never put much effort into making this Drupal installation much to write home about, and it’s a couple of versions old, but if you would like to blog here, drop me a note and I’ll get it set up for you.

Incidentally, I found some interesting sites while I was researching for my clinic. You can find them in the Links and Products sections of this site.

The meet was a huge success! Many thanks to Dave Doe for putting it together, and to Rail 2009 for being such gracious hosts.

I’ve posted a few photos on flickr. I spent most of the weekend demonstrating scratchbuilding techniques in styrene, and delivered two clinics.

Here are the highlights:

Overall, I think everyone learned something and had fun in the process.

The details are still being ironed out, but Dave Doe is putting together another meet in the Netherlands (the last one was 10 years ago). Here is the website where you can find more official information: www.rail.nl. However, here is the preliminary lineup: